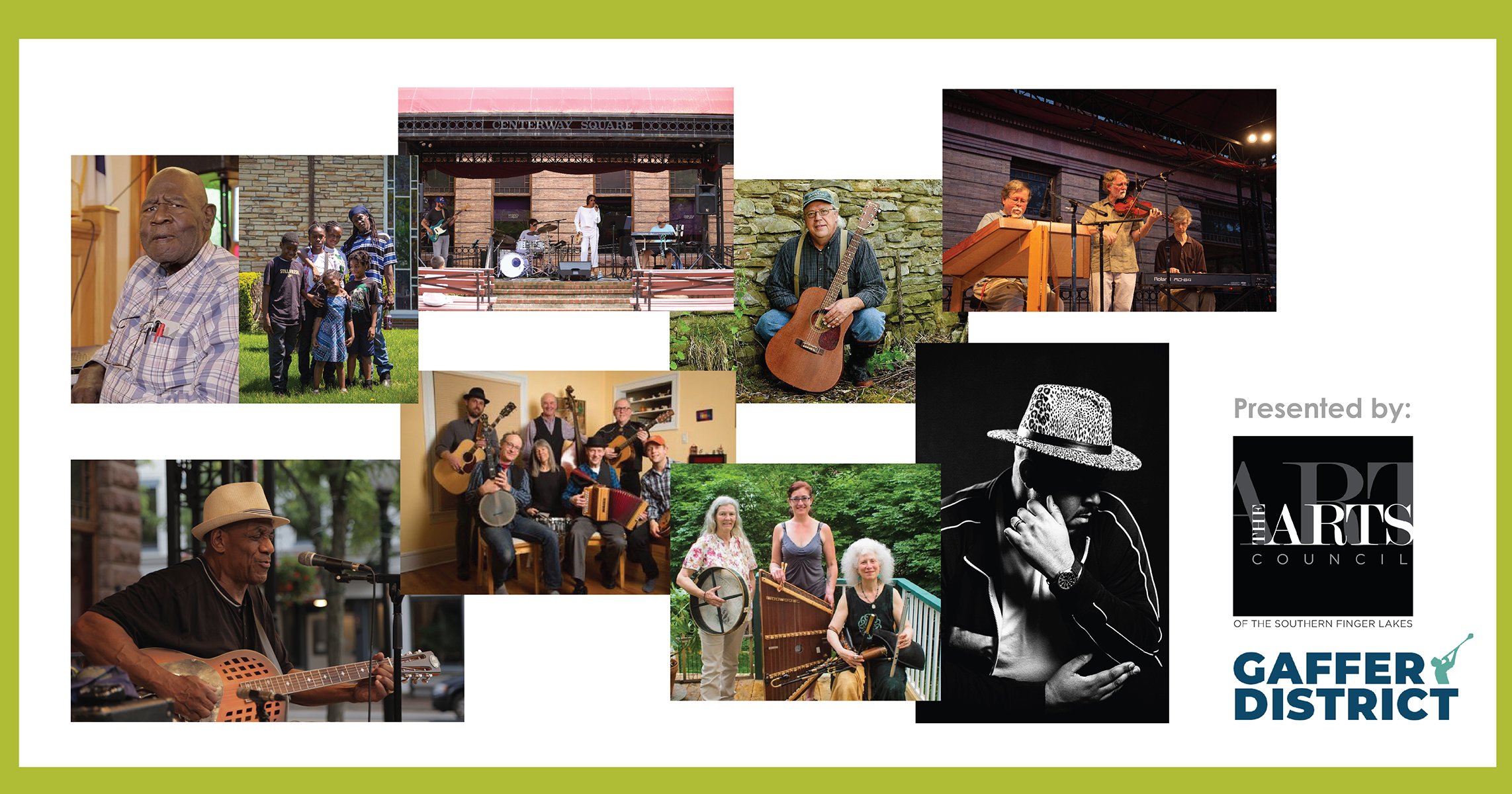 The ARTS Council has teamed up with Corning’s Gaffer District to present an exciting line-up for Music in the Square 2022. Join us on Thursdays from 6 – 8PM, July 7 – August 25 in Corning’s Centerway Square. Performances will include:
• July 7: Jose Gomez – Jose is a singer, songwriter, and pianist touring the NY and PA Twin Tiers. He’s influenced by the likes of Elton John, Billy Joel, Carole King, Bruce Hornsby, James Taylor, Steely Dan, Hall & Oates, and more.
• July 14: Top Shelf – Local favorite band, Top Shelf is a multigenerational group from the Finger Lakes Region that brings the old school dance floor funk, the Uptown hits of today, and timeless, irresistible soul everywhere they go.
• July 21: Pat Kane and West o’Clare – Pat Kane is a seasoned showman, being a singer, dancer, actor, and instrumentalist since childhood. The band includes Rob Spence on vocals and percussion, Kathy Snedeker on piano and keyboards, Ken VanEtten on banjos, mandolin, harmonicas, trumpet, third vocals, and arcane wisdom.
• July 28: Curt Osgood, Henry Jankiewicz, and John Wobus – Jankiewicz, Osgood, and Wobus, share nearly 100 years of performing experience between them. On fiddle, hammered dulcimer, and piano, at coffeehouses, festivals, grange halls, and other folk venues you can hear them presenting selections from various musical traditions including Old Timey, French-Canadian, Celtic, Americana, and more.
• August 4: Gerard Burke – Delta bluesman Gerard Burke has entertained listeners across New York’s Southern Tier and Central New York regions with his unique brand of acoustic blues played in the style of the old masters, such as Son House, Charley Patton, and Robert Johnson.
• August 11: Toivo – Toivo is a dance band from Trumansburg, NY playing the traditional music of the Finnish community of the south-central Finger Lakes region. Much of this music was learned from Richard Koski and his father who both played for Finnish dances in the area from Spencer to Trumansburg.
• August 18: Isaiah Smallwood – Isaiah is a son, a proud husband, a brother, a leader, and more. While he considers himself a student still, most of his peers call him an artist. As a musician, he has a very deep love for all types of music but is particularly drawn to R&B, Gospel, and Soul.
• August 25: Doolin’ O’Dey Trio – Doolin’ O’Dey is an exciting mix of traditional and original Gaelic-inspired music. Instrumentation of violin, guitar, Celtic whistles, octave mandolin, uilleann pipes, and/or keyboard combine to make your listening experience unforgettable. Jig, aire, or waltz you’ll be drawn into the captivating arrangements of this band.
For more information, click here.