Gettysburg Rebels – A Multimedia Review of the Book by John Trice 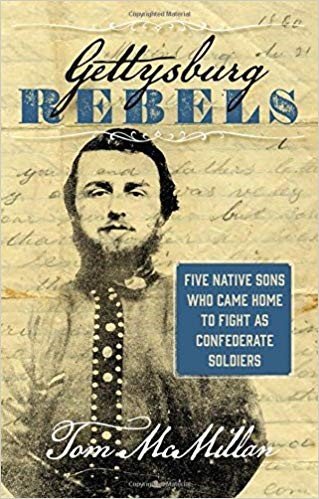 Gettysburg Rebels is the gripping true story of five young men who grew up in Gettysburg,
moved south to Virginia in the 1850s, joined the Confederate army – and returned &quot;home&quot; as
foreign invaders for the great battle in July 1863. Drawing on rarely-seen documents and family
histories, as well as military service records and contemporary accounts, Tom McMillan delves
into the backgrounds of Wesley Culp, Henry Wentz and the three Hoffman brothers in a
riveting tale of Civil War drama and intrigue. One of them ended up in the Elmira Civil War
Prison Camp!
On Friday, March 15 th , 2019, at 12:00 PM , at the Steele Memorial Library, CCLD, Church
Street, Elmira, John Trice will present a multimedia review of the book by way of artifacts and
power point including maps, diagrams, photos and video. Also included will be a paranormal
incident concerning one of the Gettysburg rebels!